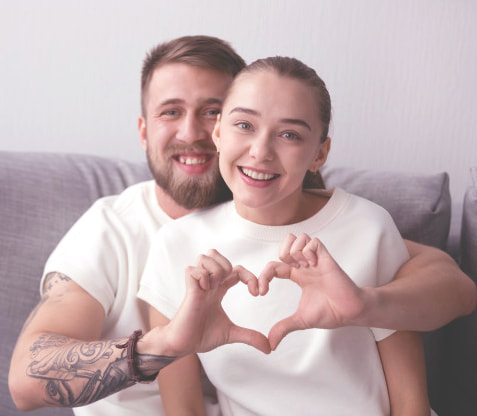 A Marital Plan means Less to Fight ABout

​Engagements:
The engagement period is a time of joy but also enormous pressure. In fact, many couples can be left feeling underprepared, overwhelmed and disconnected. In your workshop session your facilitator will help you to iron out areas left unspoken that are identified with a Gottman Sound House Relationship Assessment that could be potential problem areas for your marriage in the future.​ No other Couples Counsellor on the Gold Coast does this.

Is Pre-Marriage Counselling Common?
Yes, because marriage is a big investment (emotionally and financially), and failure comes at a high cost.
Divorce Statistics Australia (2016 - Bureau of Statistics):
​​In successful marriages, partners are more positive than negative about one another. However, not all marital arguments can be resolved.

A Happy Marriage Builds Upon (Gottman & Silver, 1999):
How Long Does it Take?
The average time couples spend in pre-marital counselling before getting married is 2-3 hours. This can be done in a 3 hour workshop.

Marriage Counselling Testimonial: We got married! Ghita, thank you so much for what you have done for our family!"  Mr & Mrs Lees (Pre-Marital Couples Counselling, Currumbin Waters).

In Pre-Marriage Counselling Couples Learn Topics for Marital Resilience:
Your marriage facilitator Ghita Andersen will take you on a journey to help you flourish in the following topics:
More Sessions:
You Will Learn to:
HOUR 1: Write your Pre-Marital Agreement
HOUR 2: Learn Your Love Languages and Rituals for Intimacy
HOUR 3: Learn to Resolve Conflict
Glitches Before the Big Day
If you are concerned already that you have some glitches in your relationship, that’s not necessarily a reason to avoid getting married. Don’t give up until you have invited a pre-marital counsellor to look at the blind spots that might need fine tuning to help you feel confident in your connection.

Many couples encounter some typical upsets during their engagement that simply require:
​Successful Pre-Marriage Counselling
Based on our experience, the most successful clients attend every appointment; so make your appointments a priority.
Fees: 3 Hour Pre-Marriage Preparation Workshop: $600
​*Includes worksheets and teas and coffees.
​
​Call Ghita Andersen for a chat today on 0439888070

​​★★★★★ Testimonial: "Since seeing you last week things have been great and it looks like we are back on track. We have connected amazingly over the weekend. Thank you." Ryan and Kimberly, (Pre-Marital Couples Counselling). Elanora.

Pre-Marriage Workshop: A Case Study:
JUSTIN AND AESHA: A story of different values

Justin and Aesha have known each other for about 1 year and been dating for about six months. Although they come from vastly different cultures, her family is Indian and his family is Anglo-Australian, they are deeply in love and plan to get married. Since they have not known each other a very long time, friends and family have suggested that a premarital counselling would be a good idea before they make any final commitment to each other.

As Justin and Aesha attend their workshop, they are both a bit anxious. They have never attended therapy or counselling and do not know what to expect. As they meet their pre-marriage counsellor for the first time, they are happy to find that they have a good rapport with Ghita and she is easy to talk to. Justin and Aesha are particularly assured after she carefully explains how she works with couples and her policy of ‘no secrets’ during the couples counselling process.

Aesha and Justin each talk about their experience of growing up, about family expectations around spiritual and religious beliefs and their values. Although Justin has spent time with Aesha’s family, he is surprised at the degree to which Aesha feels strongly about her Hindu religious beliefs and that she wants her children to have the benefit of everyday rituals. On the other hand, when Justin thinks of his own haphazard Anglican upbringing he admits to feeling a bit intimidated.

In the pre-marital plan, Ghita suggests that Justin and Aesha consider making an agreement regarding the religious upbringing of their children. At first, Justin and Aesha thought the suggestion was a little premature, however after some discussion, they both acknowledged that the issue of children and religion was hugely significant, especially to Aesha, and that one of the reasons they had decided to come to premarriage counselling in the first place was to address any major issues that might come up.

​Consequently, a resolution about some of the big issues proved to be extremely difficult and fraught with emotion for both Aesha and Justin, and they were glad they had Ghita’s assistance to work through the problem. Yet through these discussions, Justin also discovered that if they made a decision to raise their children in the Hindu tradition, their decision would have ramifications for Justin and his family.

Through a budgeting exercise, Aesha and Justin come to realise that their approach to finances is vastly different: The couple are both given $1,000 in pretend money and they have to budget and spend the funds. Aesha happily and easily spends almost all of the money with only $7 left over, while Justin finds that he wants to save the majority of the money and only spend what he has to on necessary budgetary items like housing, utilities and paying bills. The difference is both surprising and a bit startling.

Ghita realises that the value differences between her clients is quite substantial, but she uses exercises and role play activities in the third hour to help them to reframe their differences into strengths. Ghita also helps the couple to discuss how they might each be able to compromise in relation to some of these value and cultural differences, and works with them to enhance their Reflective Listening Skills so that discussing potential compromises in the future can come more easily. To this end, they receive homework to do to carry-on what they have learned in session.
​
Working with Ghita allowed Aesha and Justin to reach an honest and open awareness of each of their needs and develop true empathy for each other’s cultural needs. Counselling helped them to reach a compromise about future situations, and even more importantly, they both felt really hopeful about their future together.
* Names altered.

★★★★★ Feedback Testimonial Marriage Counselling 2022
We had been to Couples Counselling before with another counsellor. We felt we were being sold a package last time rather than doing the work, so we did not achieve much.  I was convinced that we were separating and it was too late. This session was very different. Ghita nailed our problem and made us negotiate. After many years of arguing over the same thing, she showed us how to do deals. We should have done a pre-marital agreement long ago. I can see that now. I was of the mindset to leave, but one hour turned it around for us. We negotiated our personal time and even had a contingency plan for when things went wrong. Our homework was to fill in a full agreement covering all the other points we did not cover in session and to stick this on the back of a cupboard door. We both agree this session was nothing like what we expected. Thank you Ghita. - Jessica & Andrew. (Hope Island Gold Coast)